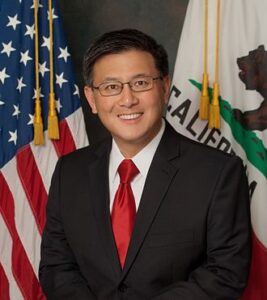 John Chiang serves as a member of the Board of Directors for Apollo Medical Holdings (NASDAQ:AMEH), Aegis Systems, and Zeuss Technologies, Inc.

From 2015-2019, John Chiang served as California’s 33rd State Treasurer. As the state’s banker, he oversaw trillions of dollars in annual transactions, managed a $75 billion investment portfolio, and was the nation’s largest issuer of municipal bonds.

Prior to being elected Treasurer, Chiang served from 2007 through 2014 as State Controller.
During the Great Recession, he took steps to preserve cash to meet obligations to education and bond holders. His cash management decisions – which included delaying payments and issuing IOUs — were instrumental in keeping the state’s credit rating from plunging into junk status. Chiang’s actions saved taxpayers millions of dollars.

He aggressively used his audit programs to identify more than $9.5 billion of fraud, waste and abuse in government programs, the most by any Controller in California’s history.

Chiang was first elected to the Board of Equalization in 1998 where he served two terms,
including three years as chair.

Chiang graduated with honors from the University of South Florida with a degree in finance. He received his law degree from the Georgetown University Law Center. In 2014, Chiang was selected as a California Lawyer of the Year