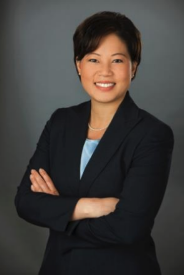 The Honorable M. Janet Chin is the Civilian Aide to the Secretary of the Army representing California in the Greater Los Angeles area. She is a combat Veteran who has served in the active Army, the California Army National Guard, and the California State Military Reserve.

Immediate past Chairwoman of the Watershed Conservation Authority and board member of the San Gabriel and Lower Los Angeles Rivers and Mountains Conservancy. Locally, she is a member of the American Legion Hollywood Post 43 and the Association of the United States Army Greater Los Angeles Chapter.

Janet has held careers in the entertainment industry as an actor, acting coach, casting director and has worked in public relations. A recipient of numerous awards for her service to the community and state, she has also been honored as a congressional district Woman of Distinction and is a national recipient of the Young Elected Officials Network Public Service Leadership Award.

Janet also serves as faculty for the Front Line Leaders Academy, mentoring and training young professionals for public service. Janet has held careers in government on the federal, state, and local levels.

She is the youngest granddaughter of a founding father of the Fa Yuen Chinese Benevolent Association and part of the lineage of historic roots coming out of the 1920’s Chinese Exclusion Act. She is currently the Chief of Public Affairs for Los Angeles County Office of the Assessor and lives in Los Angeles County. A mother of 3 sons (“KJ”, Korbin and Kasden). Her eldest son KJ, is currently attending the United States Military Academy-West Point as a Cadet of the Class
of 2023.