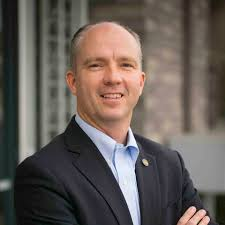 Dan Dow was first elected District Attorney of San Luis Obispo County on June 3rd, 2014, and assumed office on November 7, 2014. He was re-elected to a second term on June 5, 2018. As a career prosecutor, Dan has focused on sexual assault, child abuse, and domestic violence cases. Throughout his career, Dan has dedicated himself to protecting victims, ensuring justice and reducing crime in our community. He was instrumental in the creation of the San Luis Obispo County Veterans Treatment Court in 2013 and he formed the SLO County Anti-Human Trafficking Task Force in 2014. He is an active and respected member of the California District Attorneys’ Association where he Chairs the High-Tech Crimes Committee and is a Co-Chair of the Media Relations Committee.

Dan has served in the US Army since 1989 and currently serves as a Lieutenant Colonel in the California Army National Guard at Camp Roberts. He has been deployed overseas twice since 9/11: to Iraq in 2010 under Operation Iraqi Freedom where he was awarded the Bronze Star Medal; and to Kosovo in 2003 under Operation Enduring Freedom.

Dan attended Santa Clara University School of Law earning his Juris Doctorate and California State University, Hayward where he earned a Bachelor of Arts in Political Science, Pre-Law. Dan and his wife Wendy have been married for over 26 years and reside in Templeton where they raise their two children, Chloe and Jedidiah.